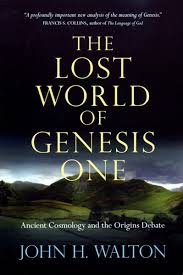 I’m behind on my reading this week, so I’m posting a book sketch my friend, Chris Woodrow, wrote for me. Given the difficulties Christians face in reconciling the Bible with the wealth of scientific information I think this book seems like a good starting-point for conversations. Disclaimer: Chris did me a huge favor in writing this, and if you’re in the market for doing me huge favors I encourage you to email me!

There are few topics as volatile as the evolution/Creationism debate, at least within our churches. Within the past year, I’ve worked with a young adult ready to give up on his faith because he couldn’t reconcile scientific evidence with his belief in a young earth. At the same time, another Christian brother questioned my faith when I suggested the mere possibility that God used evolution as a tool in creating this world. And while we Christians debate and demonize, one wonders if this is at all what God intended with the creation story in Genesis 1. Walton proposes and defends a different “literal” reading of this chapter, one that allows science and belief to co-exist without giving up anything. And you don’t have to be a scholar to enjoy the book!

The first premise is that Israelites, like most or all of the ancient Near Eastern peoples, saw the world in functional, not material, terms. For example, we might describe a key as “a small piece of shaped metal”. But a functional description requires purpose: “something to open locks”. Without a function, such an item might as well not exist, just as a key without a lock is useless. I can’t describe the sun without describing its function, how it gives light, heat, and a way to measure time. To describe it any other way would not make sense to the ancient reader.

So when Israel spoke of creation, they weren’t referring to some manufacturing process. Rather, they were referring to how something got a purpose, a role in the universe. When God “creates” the heavens and the earth, what God is actually doing is assigning functions to a previously “unproductive” cosmos. For example, God assigns light, and specifically the sun, moon, and stars, to give us a sense of time, seasons, and years.

This is a different understanding, but one that is truer to how ancient Israel understood the world. We sometimes forget the Bible’s original audiences, and instead try to force it to make sense as if it were written exclusively to us in the twenty-first century.

Walton doesn’t stop there, though. Along with some good study of the Hebrew and other texts from ancient cultures, he also proposes that Genesis 1 is a description of God’s cosmic temple. This has less to do with the Creation debate, but it has so much to do with God’s authority in the world. When God “rests” on Day 7, God is essentially taking the throne and beginning the day-to-day work of running the kingdom.

I have to admit that it’s difficult to shift my understanding from material to functional creation. I will say, though, that it’s much easier when you read the book. Walton makes so many other good points, and it’s impossible to summarize them here. He also pushed me beyond my previous interpretation of the text, which saw the story as a literary, artful way of describing God’s establishing order out of chaos. God does that, of course, but that’s only part of it!

I should also mention that this is a textual study, not a scientific book. We’re not debating the science; we’re studying God’s Word. And it’s possible (better even) to read the Genesis 1 account as ancient Israel would have read it, rather than force it into a modern, scientific explanation. Once you let go of that burden, we can enjoy the story and see what it meant to say all along.

[Israelites] thought about the cosmos in much the same way that anyone in the ancient world thought, and not at all like anyone thinks today. And God did not think it important to revise their thinking. (14)

The ancients would never dream of addressing how things might have come into being without God or what ‘natural’ processes he might have used. Notice that even the biblical text merges these perspectives when Genesis 1:24 says, ‘Let the earth bring forth living creatures’ but then follows up with the conclusion in the very next verse, ‘So God made the animals.’ (19; emphasis added)

Sometimes people have raised the question, What did God do on the eighth day? In the view being presented here, on the eighth day, and on every day since then, he is in the control room from where he runs the cosmos that he set up. (76)

This is not a conclusion designed to accommodate science—it was drawn from an analysis and interpretation of the biblical text of Genesis in its ancient environment. (94)

The point is not that the biblical text therefore supports an old earth, but simply that there is no biblical position on the age of the earth. (94)

In the end, it’s a question of how we believe. I’ve believed for a while that we don’t have to rely on “disproving” evolution in order to “prove” God. Some Christians, however, set their faith on a six-day (or six “era”) material creation, and they’re willing to ignore or challenge the current scientific consensus in order to maintain that belief. And if you can’t imagine believing in God creating the earth any other way, this book isn’t for you. But if you’re searching for a way to reconcile faith and science, this book is a great read. It challenges our reading of the text, not the science, and you come away with even deeper faith than before. I can’t think of a better outcome.