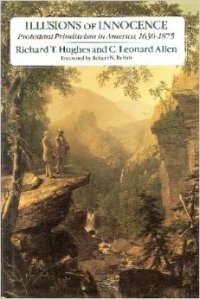 In the church I grew up in we thought of ourselves as restoring the New Testament Church. This was a way of saying that the way we did things was intended to be a copy in all things essential of the church as we see it in the New Testament. We fought one another over the minutiae of this project, like whether the early church had one or many communion cups, but we never seemed to bother too much over whether they had things like air conditioning or a/v systems. The idea that there is some pristine point in the past, such as the Apostolic community, which we can unearth and restore in our present age is called primitivism. Its easy to see how in many ways this is a naive sort of effort. But before we all ride off into the sunset on our high-horses it should be noted that every Protestant tradition has some element of primitivism in their theological make-up.

For instance, an incredibly popular opinion today is that the elevation of Christianity to official state-religion of Rome by Emperor Constantine I was the point at which early, ideal Christianity became corrupted—and the church never quite recovered from this corruption. Here again we encounter the primitivist formula:

Ideal early state + Historical corruption = Lets get things back to the way they were.

This book is important for us, then, because many of us hold on to these kinds of beliefs without either recognizing them or examining them. Hughes and Allen call these primitivist ideals into question, without at the same time dismissing them altogether. There may indeed be value in idealizing an early age, but there are also potential dangers to naïve assessments of that history or of the viability of straightforward re-presentation of such a past age in our modern world.

The central point of this study is that the “ahistorical” tendency of Christians to think of themselves as a direct copy of some far-away point in history is not only naïve, it is destructive, because it blinds us from our own faults and contingencies and fosters sectarianism—the assumption that only “our” group has it right and everyone else is therefore wrong. If we learn and appreciate our history we can gain a deeper understanding about where we can and do intersect with the ideal past and where we can’t and don’t.

In their broader analyses, Hughes and Allen focus on the ways in which primitivism flourished in the early experience of North America (more specifically the United States). America understood its own identity in terms of a primitivist lens, though one that mythologized a kind of primordial “nature” rather than religion. America provided people with an opportunity to gain a fresh break from the weathered histories and trappings of Western European history. The sense of newness and destiny in early American idealism were model grounds for cultivating primitivist interpretations of Christianity—as such the groups that grew and flourished the most rapidly also had strong primitivist self-understandings: Baptists, Disciples, even Mormons. Hughes and Allen devote most of their historical inquiry to these groups.

In their introductory and concluding sections Hughes and Allen offer something of an analysis, diagnosis, and prescription for the problem of uncritical primitivism. As mentioned above, such an outlook not only cripples our own growth, but it fosters divisiveness and antagonism among social groups. By way of a sociological point of view Hughes and Allen effectively bring to light the true nature of primitivism as a point of view that is deeply rooted in and indebted to the history it critiques and tries to escape. At the end Hughes and Allen advocate for a more learned, sober understanding of our pasts not to the point that we lose sight of it altogether, but that we appreciate both ourselves and our pasts in a deeper and truer way.

The student of Christian history, therefore, should be aware that a historical religion quickly may become ahistorical when its adherents either deny or attempt to transcend the particular history that produced them. (6)

Clearly, America’s destiny was “manifest” because it was rooted in the primordium rather than in the “cobweb tissues” of finite human history. (20)

And then, when the nation was born, the Jeffersonian Enlightenment first, and then the Scottish Common Sense tradition deposited fresh and lasting layers of primitivist thought one the already powerful Puritan concern for first times. When one adds to all of this the radical newness of the American political experiment and the millennial fervor that characterized so many Americans at that time, one has the key ingredients that contributed to a profound sense of historylessness in the early national period. (21)

In this context [see above quote], and in the face of a bewildering array of Christian denominations, sectarians found that the appeal to pure beginnings was the surest way to cut through the confusion of religious pluralism. To proclaim one’s own sect a reproduction of the ancient, apostolic order was to anoint one’s sect the one, true church while all others were merely historic, tradition laden, and therefore false. (21-22).

While virtually identifying the new American nation with the primordium, primitivists in this nation consigned both Mexicans and Indians to the finite sphere of human history and proceeded to extinguish not only their liberties but in many instances, their lives. (23)

Clearly, the restoration ideal has not been the exclusive property of a few eccentric Christian sects. It has informed the fundamental outlook of preachers and presidents, of soldiers and scholars. Indeed, the restoration perspective has been a central feature o American life and thought from the earliest Puritan settlements, and now continues to exercise a profound influence on the thinking and behavior of the American people. Nowhere can the effect of this perspective be discerned more clearly than in the bounds it sets—and continues to set—on human freedom. (24)

The only viable antidote to American sectarianism is the prescription issued by Reinhold Niebuhr when he wrote that American success in twentieth-century world politics “requires a modest awareness of the contingent elements in the value sand ideals of our devotion, even when they appear to us to be universally valid; and a generous appreciation of the valid elements in the practices and institutions of other nations though they deviate from our own.” (232)

Awareness of our failures and appreciation of the traditions of other swill not likely occur, however, so long as the luxuriant growth of pretentions to innocence remains unpruned. And that luxuriant growth will not likely be pruned so long as its roots go unexamined. This book has attempted to examine those roots in all their tangled complexity and to understand the illusory and ironic fruit the primitivist tree has borne and continues to bear in American religion, life, and culture. (232)

What makes this book great is the vitality with which Hughes and Allen engage in the subject. Here are two scholars at the beginnings of their academic careers whose writing conveys a sense of interest and excitement, a sense that these issues matter. I think this kind of motivation makes their criticism more well-rounded. They’re not interested in tearing apart some obnoxious idea, they’re interested in engaging it, tracking how it functions historically, sociologically, and theologically, and seeing how we might better approach the topic based on a deeper understanding of the issues.

Anyone interested in this phenomenon that, to one degree or another, describes almost every Protestant should read this book. For some it might be a little disappointing, but my experience of studying history with others is that it is liberating. It puts things into perspective, explains in new light things we’ve always done and thought without knowing quite why. And studying history ultimately frees us to work out our core values in truer and more authentic ways.