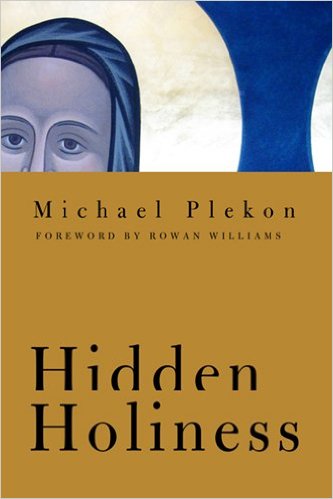 In my church tradition there are no canonized saints. A saint, I was taught, was simply a member of the church. The idea of people who were to be praised or prayed to or have their pictures kissed was seen as idolatrous. Looking back a lot of this was reactionary critique, one among many policies my church held in defense of being “not like the Catholics.” Yet if we can let some of the xenophobia go, there’s a beauty to the idea that sainthood is not reserved just for the celebrities among our churches. Rather holiness has much more to do with the common, ordinary, and even unseen or unnoticed ways in which we become wrapped up in the work of God in the world. Hidden Holiness is itself a little-known work that offers a fresh and life-giving perspective on what it means to be holy in today’s world.

Michael Plekon has spent the latter part of his career thinking and writing about saints and saintliness. His own life is rather extraordinary, beginning faith in the Catholic Church, converting to a Protestant church, and now finally a priest in the Orthodox Church (OCA). This range of experience within Christendom, no doubt arising from his God-given desire to seek God regardless of our petty human boundaries, allows him a broader perspective with which to see what it means to be holy.

Hidden Holiness is an attempt to figure out what it means to be a saint in the modern world. Sainthood is often wrapped up in notions of purity, perfectionism, or extraordinary religious feats. So much so that sainthood is no longer a guiding norm for many Christians—it is just so unattainable, perhaps meant only for those with very special callings, but also therefore irrelevant to ordinary religious life.

It is against this unrealistic elitist conception of sanctity that Plekon tries to construct a better understanding of what it means to be a saint, a holy person (hagios). The brilliance of this book is that it is not an academic diatribe, neither is it a sustained theological treatise (though it is both academically sensitive and theologically deep). The method that Plekon chooses to think through sainthood is by thinking about actual saints as he sees them. Thus the book takes us through a host of biographies from persons across the theological and ecclesial spectrum—some living, some having entered their rest.

It is not just the freshness and grace-full-ness of his thoughts that make this such a great book, it is the pictures he paints of saints—some familiar, some not—all of whom live real lives. They are cantankerous, moody, selfish, headstrong, and impatient, yet they are also given over to the work of God. They drink and curse and get lost in bouts of depression, some of them never wanted faith, some of them lose their faith for a time. Yet, again, they are wrapped up in the work of God that does not need to dismiss these human flaws and failings in order to bring life into the world. The older we all get the more we realize that there is perhaps no other way.

Plekon tries to emphasize two things: 1) sainthood is ordinary or hidden, 2) sainthood is imperfect. First, we live in a celebrity-centered society. Success is almost subconsciously defined in terms of publicity: how many people (and the right people) singing our praises. Without dismissing the notion of heroes entirely, Plekon asks us to realize that saints are actually not often celebrities in their time. The Hebrew writer refers to many unknown saints by saying “the world was not worthy of them” (Heb 11:38). This is a lesson perhaps many of us know, but haven’t come to terms with: sainthood is not about how many people recognize how holy we are. Moreover, Plekon urges us to think about holiness as innately hidden—something that resists public recognition, or is at least uninterested in it. Although this may devalue some of the extraordinary folks among us, at the same time this gives us a lens to think about the holiness of the ordinary people around us.

Second, we are tempted to see our flaws and failings as prohibitive to a relationship with God, much less sainthood. But in so many ways being a saint is about pursuing God despite and beyond our personal blemishes. There is growth in holiness to be sure. Sometimes our vices diminish and we are hopefully formed into people who are a little bit less of a jerk each day. Yet the idea that saints should live these other-worldly kinds of lives is just a product of our imaginations. These kinds of saints never have and never will exist. Saints are just people who, in the face of their weaknesses, choose to also find ways to love God and bring life into the world.

I want to explore the shapes of a universal and more ordinary, and thus less noticeable or hidden holiness, one founded on the baptismal calling of all the prophets and priests, witnesses to the Gospel. (4)

Part of the problem here is allowing a tradition to stagnate out of exaggerated reverence. In our everyday language, the very ways we talk about “saints” reveal this. They are impossibly virtuous and pure, hopelessly out of contact with everyday life and feelings and concerns. They perform unbelievable miracles, pray for impossible numbers of hours, eat next to nothing, go without sleep, and appear in more than one place at the same time. Some are able to hover in the air, others fly. (11)

Only very recently have we begun to recognize the authentic holiness of ordinary people: married women and men, parents, teachers and lawyers, medical professionals and social activists, and even clergy and religious who did not perch on pillars or subsist only on the Eucharistic elements. Can saints be political radicals, poets and writers, professors and resistance fighters, ordinary married couples and parents? Or should the question be reversed? (13)

When we see or hear a person of faith—we should in actuality say, a saint-in-the-making—whether a Teresa of Avila or an Etty Hillesum, we should understand that the abstract categories of sainthood must be discarded. One who is seeking God will always be a mix of weaknesses and strengths, failures and accomplishments. The notion of the holy person as perfect makes the rest of us fade by comparison and shrink from imitation. Likewise, distinctions such as those just mentioned begin to disappear when we confront a person, a set of experiences and written thoughts about them—in short an incarnate person of faith, a “living icon,” rather than a stereotypic “holy picture.” (36)

[H]oliness is not heroic feats of asceticism or virtue—exactly what the celebrity version of sanctity seems to insist. Rather, holiness has to do, is a relationship, with the Holy One and thus is connected to wholeness. Holiness, further, does not require the absence of sin and human qualities, eccentricities, phobias, sufferings—the substance of ordinary human life. Holiness is a struggle with the baggage of human existence, all the elements that make us who we are. (42)

To speak of holiness in our time as both ordinary and hidden, while challenging in itself, does not imply a total rejection of the church’s past, of the models and examples of holiness of former centuries. More often than not an unexpected continuity with the past will be uncovered. (59)

Is it possible that quantity of prayer, adhesion to precise forms, and frequency of attendance at services are less crucial for us today, compared with the liturgical lives of saints in the past? Might we also want to enlarge the scope and meaning of liturgy and prayer to extend beyond church services into other forms of artistic expression, engagement with the culture and with the sufferings of others? (99)

[Speaking of Lev Gillet] We can only imagine how many people felt welcomed and respected by this inconspicuous little man, only a notch above a street person in his clothing despite his possessing the highest rank a monastic priest could be granted. His park bench companions would have been startled to know they were talking with a well-known author, also a confidant to many bishops and theologians. They would however have called him a friend. (138)

The more we live and work with those not of our faith and community, the more we ourselves internalize and understand different points of view not reconcilable with our own, the more we sense the walls, the borders, the distances. Yet, it is a mark of the sanctity of our time being examined here, of “hidden holiness” that It is lived out precisely in the diverse world of our culture. (145)

Saints have an extraordinary ability to repel and attract at the same time. Their qualities and characteristics and teachings and lives push the boundaries of the norms and faith in which we are comfortable. Yet we are strangely attracted to this kind of radical faith as a source of life, newness, and authenticity. Hidden Holiness urges us to shatter the illusion that true sainthood is about perfection, or rather that the saintliness that we should look to emulate is a matter that lacks flaws and vices. And by doing so it allows to see the sainthood of the ordinary, weak-willed people around us, and maybe even within our own selves.

← Being With God (Papanikolaou)
You Lost Me (Kinnaman) →