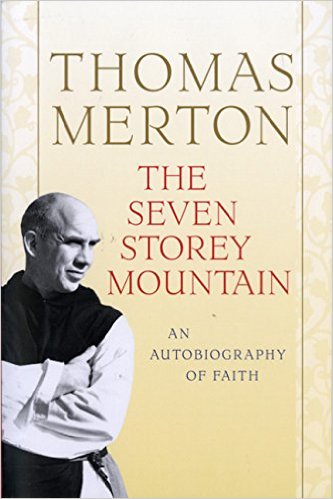 Converts are always the most zealous of any religion, or organization for that matter. Perhaps it’s because they consciously chose their position, whereas someone brought up in the faith needs to do little more than acknowledge their faith—making eye-contact with it, so to speak—before they continue living their lives as they always have done. Or maybe there’s a sincerity and a willingness to call their beliefs into question in the spirit of the convert. They are zealous because they care. Either way, converts are always so zealous; so utterly convinced of the truth of their conversion and the falsehood of their former ways.

Thomas Merton’s autobiography, The Seven Storey Mountain, is the story of his conversion, written just a few years afterward. Unsurprisingly we hear the voice of the zealous convert for whom the grass on the other side is still green, though perhaps showing subtle signs of wilting. One of the reasons it took me so long to read this book was because I had heard that Merton disavowed it later in life. So why, I thought, would I bother reading a book that the author himself dismissed? As I read the book, and having read some of Merton’s mature thought, it became quickly clear why this book made him anxious: The Merton of The Seven Storey Mountain likes Trappists and is often dismissive of non-Trappist monks; he likes Catholics, but barely manages to say a complimentary word for non-Catholics. Indeed, non-Christians come off as more worthy of praise if only because at least they’re potential Catholics!

Reading Merton’s (first) autobiography as a Protestant (of sorts…) can be a bit jarring. On the one hand, in light of the extreme and often violent anti-Catholicism in the history of American Christianity, I can hardly fault him. I’ve read far worse caricatures of the Catholic tradition from a Protestant perspective. On the other hand, Merton’s caricatures of Protestant churches seem to be a feat of the will rather than the intellect. Early on he reflects upon his experience with the Quakers, and I thought to myself: “Oh good, if he’s going to like anything it’s going to be the Quakers!” But even then the best he could do is classify them as lesser contemplatives; not quite Christian but maybe on the right track. He writes,

I think that one could find much earnest and pure and humble worship of God and much sincere charity among the Quakers. Indeed, you are bound to find a little of this in every religion. But I have never seen any evidence of its rising above the natural order. They are full of natural virtues and some of them are contemplatives in a natural sense of the word. . . . Yet I cannot see that they will ever be anything more than what they claim to be—a “Society of Friends.”

Later in life Merton would repent from this attitude and embrace a radically ecumenical perspective. It is for this reason that he would later disassociate himself from his early autobiography, describing it as “the work of a man I have never even heard of.” There are lots of reasons and developments in Merton and in Catholicism for this change of heart. Other people could do a better job at tracing all that out. Merton’s own struggle with the ecumenical question—from skepticism to embrace—makes me want to engage with my own. And so here goes.

My path to becoming ecumenical

Protestants are aptly named as we love to protest our own. When Merton harangued the various churches he visited as a child, I cheered him on. What a strange, neurotic attitude. Can we call it spiritual masochism? It makes us feel better to immerse ourselves in criticism, especially self-criticism. I don’t think this is peculiar to Protestants, but we certainly do embrace it. It’s almost an inescapable second nature: I’m doing it just now!

One way this self-critical ethos manifests in my experience is with a profound sense that the grass is greener on the other side. Or else in a staunch and fundamentalist attitude that our particular articulation of faith is the absolute truth. Mine manifested in the former, not the latter. I fell in love with “high-church” traditions, thinking at times as a younger person how I might fit in with the Lutherans or Episcopals.

I was drawn the most to the Orthodox Church. I befriended a local priest, attended Vespers on a semi-regular basis, and even visited a few monasteries for various reasons. Some of my struggles with the idea of converting were assuaged by a rediscovery of the roots of my own tradition. More on that in a bit. The rest were settled by a conversation with a different priest than my original friend. This new priest was himself a convert. (I believe he used to be Lutheran, but what does it matter?)

We sat in the reading room of his church and started talking about the differences between Orthodoxy and the rest of Christianity. As we talked it became clear that the overarching theme of all our topics was that Orthodoxy was the real faith, and that all other iterations of Christianity will never find the fullness of Christ; if they were even saved at all (which at least was left as a question and not a denouncement). Typical convert.

I left the conversation a little depressed. I saw such life and vitality in Orthodoxy, but I have heard the song this priest sang before and it is not the song of life, it is the song of insecurity and jealousy and envy; the song of death.

The truth is I had heard this song sung in my own church tradition. We may not have been the first ones to sing it, but we sung it loudest and best (and we didn’t even use instruments in our version)! I ended up deciding that the grass was not greener on the other side. If I was looking for people who thought they had it all figured out and that everyone else was lesser, more foolish, mislead, or even damned, I did not have to convert, there were plenty in my own tribe.

To that priests credit he did say one thing, albeit with a sense of disbelief, that I took to heart. He said, “You should just try to be the best Christian that your church commends. If you’re church of Christ, then just be the best embodiment of your tradition you can be” (with the caveat that this will inevitably lead back to Orthodoxy…). And that leads me back to my earlier remark about a rediscovery of my own tradition.

My church has its roots in 19th century American Christianity, though they are deeper really. It’s been over 200 years since Thomas Campbell penned the Declaration and Address, a founding document of sorts. Things have changed a bit since then. Common themes of my church—the restoration of New Testament Christianity and a rejection of the divisions and “denominations” of the Christian faith—have morphed and developed over time. These ideas that today are seen as naïve, fundamentalist, and self-righteous were not always so. I discovered that there are other, truer ways of getting to the very rich heart of Churches of Christ, ways that were always latent in my church’s teaching, but so often covered up in the mess of ego and misanthropy. And so I discovered myself in my own church.

Unlike Merton I am a failed convert. I was attracted to other traditions, but never found myself there. Rather I converted to my own faith tradition. And it is out of this odd re-conversion that I found the basis for my own ecumenical attitude. To conclude an already lengthy reflection my own ecumenical attitude has its basis in an attitude I believe is at the heart of my ecclesial tradition in particular, and the Christian faith in general:

“If we say that we have no sin, we deceive ourselves, and the truth is not in us. If we confess our sins, he who is faithful and just will forgive us our sins and cleanse us from all unrighteousness.”

Churches of Christ call people back to a bible that is saturated with the insistence that we recognize our own personal and corporate insufficiencies, with the assumption that life is not found through perfection per se, but through an acknowledgement of our faults and deficiencies in view of God’s grace. This applies ecclesially. I am confident my church tradition is limited, and fails in many ways. But I am confident that it also forms people into the image and likeness of God by the grace of Jesus and the work of the Spirit. So long as we maintain an attitude of absolute ecclesial perfection there is no grace, and consequently a divisive and self-righteous attitude emerges. In odd ways the insistence on our possession of absolute truth is the very reason we have become so sectarian!

We have not always thought so. There were certainly traces of this kind of sectarian thinking in our earliest figures, but nothing of the sort surfaced in the last century. In an important sense it was the anti-intellectual attitudes of our earliest leaders that undermined this sectarian attitude. Barton Stone and Alexander Campbell were anti-intellectuals not in the sense that they devalued education, but in the sense that they wanted to wrest control of biblical interpretation and literacy out of the hegemonic control of academic professionals. Even the educated did not know everything, they insisted, and the average person has the need to study for themselves and bring something to the table. Ironically it was the anti-intellectual criticisms Stone and Campbell surfaced that laid the foundation for an ecumenical and deeply educated early movement. We find little trace of the sectarian attitude in Stone and Campbell precisely because they acknowledged that they did not have it all figured out, and were pleading with others to admit this too.

I think its appropriate to describe this ecumenical attitude as a stability in grace. I can affirm the ecclesial traditions of others without feeling the need to convert myself or otherwise correct them precisely because I know I don’t have it all figured out, and because I know that God is bigger than all of our church’s doctrine and is guiding each of us in our own toward unity in him.

And so we return to Merton. My suspicion is that his own ecumenism developed along similar lines. The answer to our spiritual hunger is ultimately not found in some other church or religion or any zero-sum, idealistic solution. It is found in an acknowledgement of our moral and intellectual limits, in an ecclesially broken and contrite heart that God will not despise. This does not mean that conversion is out of the question, but to simply say that it is not the answer itself, and will never be the answer until we come to terms with our own personal and ecclesial finitude. It is out of this cruciform humility that the ecumenical outlook emerges, confident that God transcends our facile earthly divisions and is guiding us all back into unity in the Kingdom.

← Engagements: What It Takes to Be a Saint
The Pastor Theologian (Hiestand and Wilson) →