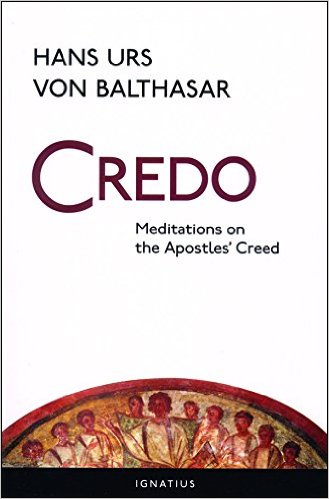 Several years ago the church I worked at went through sermon series on the Apostles’ Creed – the earliest creed summarizing the central tenets of the Christian faith. During this series my job was to write a short reflection on each line. I read two books to help me along during this process. The first was Karl Barth’s Dogmatics in Outline and the other was Balthasar’s Credo. I learned then that I did not like Barth as much as I thought, and I liked Balthasar way more than I thought. In fact this became the best book I had read in a long time. Now I’m preaching through the Apostles’ Creed with my church which gave me an opportunity to revisit this wonderful book.

Hans Urs von Balthasar, besides being a strong competitor for most fantastic name of a theologian, was a Catholic theologian and priest. He was a prolific writer, and just looking at the size of some of his theological tomes can be a roadblock to ever reading what he has to say. That is part of what makes this little book remarkable. Balthasar wrote the material for this book late in life. It was not intended as a book, rather the material began as monthly reflections on each line of the Apostles’ Creed for pastoral newspapers of local German dioceses.

There is an important sense in which this small book—at only 105 pages with larger than average print—is a kind of summary of what Balthasar has written at length and in great detail elsewhere. In my personal opinion this book is a near-perfect representation of good theology. It blends technical precision with strong rhetorical expression while bringing these two together in an uncommon simplicity of expression. Anyone can read this book. But above all this book moves seamlessly between theological exposition and spiritual and even mystical communication. Balthasar holds all these vital pieces together, allowing the Apostles’ Creed to frame what Christianity and the Christian life means for him.

Upon reflection what really stands out in this book goes along with what I just said about the spiritual and mystical center of this book. It is one thing to talk intelligently about self-emptying nature of a God who is Trinity in Unity. It is another to move from this theological dogma into the existential realities that arise as a consequence of this reality. Anyone who reads this book will not only understand God’s nature as love, but will find out how this love functions as the basis of a spiritual life embedded in our physical and social world. There is no ‘Theological’ section followed by ‘Practical Application’ section. It is all one as good theology always is.

Everything manifold stems from something simple. The many parts of the human body, from the fertilized ovum. The twelve clauses of the Apostles’ Creed, it eh first instance, from the three component questions: Do you believe in God the Father, the Son, the Holy spirit? But these three phrases, too, are an expression—and Jesus Christ provides the proof of this—of the fact that the one God is, in his essence, love and surrender…It is therefore essential, in the first instance, to see the unimaginable power of the Father in the force of his self-surrender, that is, of his love, and not, for example, in his being able to do this or that as he chooses. (29-31)

[In reference to Matthew 25] Where will we stand, left or right? From what we know of ourselves, we can assume: most probably, on both sides. Much in us will appear to us ourselves, and especially to the Judge, as worthy of damnation; it belongs in the fire. That not everything in us was reprehensible, that we have not, our whole life long, from childhood on, said only no to love, is something that we might hope for from the grace of the Judge. Should it be fully in vain that he “died for us”?

Should we designate “the living” as those who will pass the test of judgment, and “the dead” as those in whom nothing worthy of life everlasting is to be found? Such an interpretation is far from the spirit of the biblical texts. Even if it is said to one Christian communion: “I know your works; you have the name of being alive, and you are dead. Awake, and strengthen what remains and is on the point of death” (Rev. 3:1-2), what is thereby expressed is only an extreme warning: The “dead” communion can, if it wants to, “awake.” (71-72)

← The Freedom of Simplicity (Foster)
The New Jim Crow (Alexander) →